Over the weekend, I read Big Magic by Elizabeth Gilbert, the best-selling author of Eat Pray Love. It was loaned to me by my partner, Abby, who set it on the coffee table and left a Post-It note that read “Follow your curiosity…” stuck to page 235. Recognizing it as the act of love that it was, I started from the beginning and read it straight through to the end of the course of two days. I’m so glad I did.

The central idea in Gilbert’s book is that living a creative life is a choice we each make. She suggests that ideas are ethereal, and that they come to those who are ready to accept them and work to bring them into existence. We can choose to listen for these ideas – they are quiet, almost faint, and often are not immediately clear – or we can let them go, and they’ll find someone else willing to see them through. Ignore ideas long enough, and they will stop coming to you.

I used to live a creative life. Or, I suppose as the late Mitch Hedberg might say, “I still do, but I used to, too.”

Growing up, I passed the time by drawing cartoons, usually as a way to entertain my friends. My favorite illustration-based storytellers were Bill Watterson, Gary Larson, Berkeley Breathed, Mike Judge, Matt Groening, and Bill Plympton. I carried around with me a notebook where I’d put what I thought were my best ideas into it, and slowly built up a little catalog of quickly drawn cartoons paired with terrible puns.

I started working at a fast food restaurant the summer before my 16th birthday. Two summers later, I hadn’t saved up much, but managed to convince a co-worker to loan me enough money to purchase a drum set. It took me over a year to pay her back in full, and by the end of that year, I’d started playing drums with other musicians, and pursued that creative path for quite some time after. I played in a lot of different bands, and through the years, I designed stickers and t-shirts and illustrated numerous record covers and show posters.

It was during that time that I purchased the Complete Idiot’s Guide to Creating a Web Page & Blog, and started teaching myself about web development.

In the subsequent years, I built simple static sites for myself and my friends’ bands, as well as my first ever site for a small business. I never pursued the practice as a full-time thing – I enjoyed doing it too much in my free-time over nights and weekends, slowly building up a catalog of knowledge and being able to achieve more and more.

In 2011, I enrolled in an Associate of Applied Science program at my local community college. During that time, I wasn’t actively playing in a band, but I was renting out a practice space near Downtown Minneapolis so I had some place to go to play drums. I bought a desktop computer and put it in that space so that I could also continue to work on my programming skills. I took that time to explore creative writing in the form of poetry and occasional prose, and I did a redesign on this website that included some of that poetry and my illustration.

Two years later, I began my first web development internship. After I graduated in May of that year, I was given the opportunity to work full-time at that same agency and have been generally working in that exact same space ever since: agency WordPress development with a dash of Shopify.

By 2017, my partner and I bought our first home. I had just quit my last band a few months prior, and before we moved, I gave my (second) drum set away to my friend and former bandmate Matt. I felt that I was done playing music, and couldn’t bear the thought of having a drum set just sitting up in storage, and we didn’t have much room for it anyway (not to mention our neighbors probably wouldn’t take terribly kindly to me bashing away at the kit).

From that time until now, the only constant has computer programming. My focus narrowed to primarily back-end development upon joining an agency that worked with larger corporate clients, and as I mentioned in my last post, I’ve felt more or less like I’ve been treading water since then. I still draw, but not seriously. I still make music, but haven’t committed myself to it. I still write code, but it’d been so narrowly focused at work that my hunger for more has largely been dependent on my energy levels at the end of the day and on weekends.

It’s possible only my friends have read about any of this on my blog, since I changed the focus to only the computer programming aspect some time ago. I still intend to keep that focus here, but as of today, and in the spirit of Elizabeth Gilbert and with much thanks to my beloved partner, I am taking active steps to reclaim my time and my creative life.

I am a musician.

I am an illustrator.

I am a computer programmer.

I am a business owner.

I’m still working on the next phase of my career, but one thing that is clear is that I want to get back to working on interesting projects. I want to help people who are struggling to reach an audience over the internet to build their platforms and give them a voice. I want to build meaningful relationships and empower others to be able to express their own creative voice by creating and assembling the tools that they need to achieve that.

If you’re working on a project or are just getting started with a new idea, and you need technical expertise, I can help. At this time, I’m open to taking on projects involving full website builds, custom plugin or application development, or website upkeep and maintenance. My primary experience centers around WordPress, but if you need help building a Shopify site, or you already have or want to build a web application in another language such as PHP, Python, Node, or Go, I’m most interested in these new challenges and will work with you to help you create your vision on top of these platforms using industry-standard frameworks, practices, and tools.

Thanks once again to my wonderful partner Abby for helping me recognize my path back to a creative life, and for all of her love and support over the years.

You can learn more about Big Magic at Elizabeth Gilbert’s website:

If you have a Spotify membership, you can listen hear me play drums via this playlist:
(edit: removed. I canceled my Spotify subscription in favor of Tidal)

Here’s an illustration I posted on this website several years ago, drawn on an iPad:

Here’s an animated GIF I made from photos I took at the Minnesota State Fair in 2013:

Finally, I republished one poem I wrote in 2011, entitled Waiting.

I’ve learned this weekend that it doesn’t matter whether any of this is any good. What matters is that I continue to create. I’ll leave it to the rest of you to love, hate, or feel nothing at all about any of it. This time is all we get. Thanks for reading. 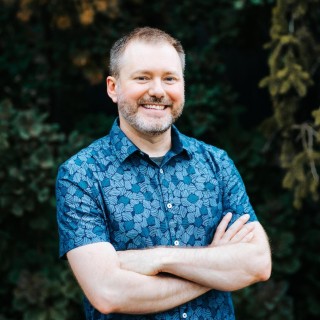