Historically, March is the second snowiest month in Minneapolis behind only January. I thought last winter was far more bleak and depressing, because we got fewer than two feet of snow, when the Twin Cities traditionally gets around 50 inches. I’m grateful for the snowfall this month, but naturally understand that most everyone else is ready for spring. I’m antsy for spring to arrive, too, but my impatience comes from a source more closely tied to calendar dates.

Graduation Day at St. Paul College is on Thursday, May 16th, which coincides exactly with my last day of class and the completion of my AAS degree in Computer Programming. Spring Break just wrapped up yesterday, which means there’s only eight weeks between now and the achievement of a goal that’s been put off for far too long. I can’t wait to be finished with classes (for now?) and to step full-time into my new career. That said, I am still pretty excited about two remaining topics this semester:

On the day of this writing, I consider myself to have few brand loyalties when it comes to computers and operating systems. Although I’m writing this particular post on a three-year old Apple iMac running OSX Mountain Lion, the system has a dual-boot setup with Windows 8 installed, along with a virtual machine that can run pretty much anything else of interest to me at the time (currently, I can boot up Linux Ubuntu, but have also tried out Linux Mint and the Chrome OS in the past). I also have a budget Acer Aspire One laptop that I purchased at Target two summers ago for $230. It came with a full version of Windows 7, 2GB of RAM and a 250GB hard drive, which I’ve since upgraded to Windows 8, 4GB of RAM, and a 128GB SSD drive, respectively. I don’t really store anything on the machine, and thus could just as easily purchase a Chromebook or other comparable device, if I wanted (though, actually, I do have a desire for more processing power along with the portability, so I’ll be keeping my eyes open for a refresh on Ultrabooks this summer…). As long as we’re going down this path, I may as well mention that I’m also a user of Android mobile devices, but have used a litany of other brands and models on every single network in the past – iPhones, Blackberries, RAZRs, Sidekicks, Nokias on AT&T, T-Mobile, Sprint, and Verizon – the whole nine yards.

That’s a long way to say that I don’t know much about Linux right now, so I’m looking forward to classes starting up again tomorrow and being able to give it a proper go.

As for the message board, it’s something I’ve been wanting to build for awhile, but haven’t set aside the time to do (and until now, didn’t necessarily feel confident that I could figure out how to do it). This weekend, I put the primary structure in place – one can sign up for an account, look at existing topics, create new topic threads, and reply to existing threads. It’s enjoyable to see it take shape, and it will be a rewarding process to build out the feature set I want to have as well as meet the requirements of the assignment (which to be honest, are pretty vague, so I’m doing this out of my own interest as I want to have fun with it). I have so much to learn about the application design process, and I know there is much to be done to protect the system from invalid data, scripting attacks, form spoofing, and someday in the future, trolling users and other unwanted results. This project is a baby step in the larger journey.

All that said, the next couple of months are going to fly by, and before long we’ll all have forgotten about the snow and we’ll instead be booked with outdoor plans, get togethers, and trips to exotic destinations. For me, I’m eager about newfound employment in my chosen career field and a plethora of exciting projects to work on to help make me a better programmer.

I’ve been meaning to jot down some thoughts about the inaugural Midwest PHP Conference that was held on March 2nd and 3rd at the University of Minnesota’s Continuing Education and Conference Center in St. Paul, but the words fail to come out every time I sit down to do it. Perhaps I assign too much value to the importance of words. Here’s a picture: 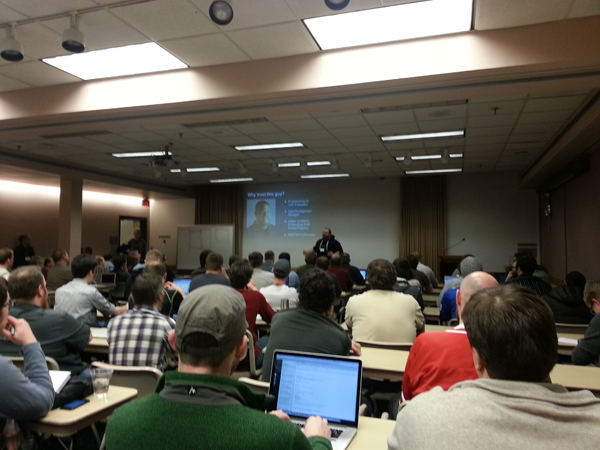 That’s Aaron Saray, a PHP Developer from Milwaukee who gave a riveting presentation about using PHP design patterns and modularization for enterprise applications to a packed room on Saturday afternoon. As a relative newcomer to the world of PHP and computer programming in general, I’d contemplated whether Aaron’s talk might be over my head. After all, he was presenting what seemed like an advanced talk about object oriented programming at the same time as another presentation that offered an introductory look. Afterward, I felt great about my decision. Aaron’s delivery was fast-paced and hilarious and his presentation introduced just enough basic information upfront to help others like me understand the overall concept of the topic before digging deeper into the details.

Following Aaron’s talk, I made a decision to attend a presentation entitled “Backbone.js in a PHP Environment,” and I think these two sessions together encapsulated my impressions of the conference as a whole. During the course of the weekend, each session ran concurrently with three others, and what you learned in one, you gave up elsewhere. The “Backbone” session was offered during two other presentations of interest and relevance to me (“The WordPress Hacker’s Guide to the \Galaxy()” and “JavaScript’s Difficult Concepts Explained”), and based on real-time reactions on Twitter, I was missing out.

In many ways, the enormous impact of these tradeoffs speaks to the quality of the offerings at this first-year conference. At one point (the last session of day 2), there were four different presentations all running concurrently that I wanted to see. Essentially, I threw a dart and landed on Josh Broton‘s presentation called “Embrace Your Inner Designer” where I saw his hilarious introduction to the “value” of the HTML marquee tag, along with many far more insightful tips and recommendations. Unfortunately, this was at the expense of seeing Chris Hartjes speak about PHP unit testing, Mike Stowe‘s “Introduction to Zend Framework 2”, or Jesse Donat‘s presentation about PHP command line scripting.

Essentially, it was a terrific conference and an amazing first-year effort by the aforementioned Mike Stowe and co-collaborator Jonathan Sundquist. I feel fortunate to have finally found my career calling and to live in the backyard of such wonderful programming talent. I’m already looking forward to next year, and I’m optimistic that some tweaks will be made to the scheduling to attendees to catch more of what they want to see.

Testing, testing, is this thing on?

Oh, good! Hello! It’s nice to be back and have a presence on my own site again. Pardon the mess while I get things in order. I have all sorts of news to talk about, including:

Spring break officially started for me this afternoon, and I spent some time today building out this very ugly, very broken, and very incomplete theme (chances are highly likely that if you attempted to visit this page from your RSS feed, you got a message that there was nothing here) and putting my site into a content management system. I’m looking forward to working on it some more over the next week or more so it’s not so hideous (and not so broken, and so there’s actual stuff to share!). In the meantime, I’m headed off to hang out with a long-time friend, but I wanted to write up this quick post to say that I’m back and that I’ll be posting again and cleaning up real soon.